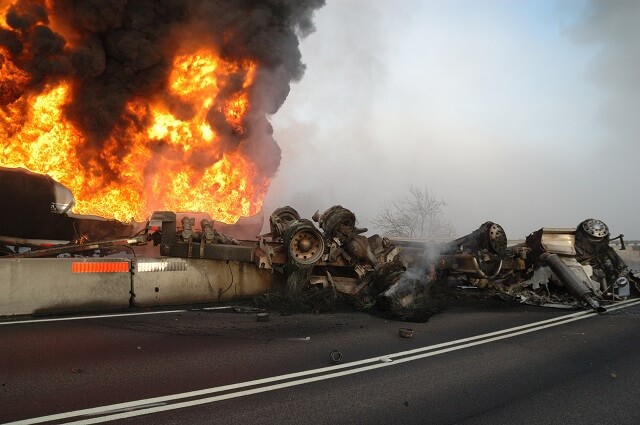 On August 25th, a tragic accident occurred on Route 17 in Binghamton. Luckily, a dashboard camera caught three minutes of film, which showed not only the accident, but the heroic acts that occurred immediately afterward.

The crash depicted on the dashboard camera is chaotic. You see a semi-truck plowing into several cars, and these vehicles dispersing across the entire highway. You see people exiting their cars and running to safety. Then, you see a white sedan off to the left of the video igniting into flames. The blaze is strong.

Then, crash victims and individuals who witnessed the crash realize that there is a woman trapped inside the burning vehicle. They quickly rush to the car and attempt to remove her. One man uses a fire extinguisher to help reduce the flames, while several others pull the woman from her blazing automobile. Luckily, the woman was able to escape the horrific crash with minor cuts and bruising – thanks to the heroism of those who saved her.

Overall, there were 10 vehicles involved in the accident and 10 people were hospitalized for injuries, though none were reported as life-threatening.

This accident, luckily, avoided serious tragedy. It could have easily become a fatal accident had it not been for the actions of those standing by.

Authorities have contributed fault to a tractor-trailer as the cause of the accident. They state that the trailer’s inadequate brake system caused the accident, which occurred at 4:20 pm – shortly before rush hour. The operator of the truck had been ticketed for operating an out-of-service vehicle. Because there was congestion on the highway, the number of cars increased. Since the trailer was carrying an excessively heavy load (of stone blocks), it could not properly stop in time and collided with other vehicles, contributing to the pileup.

Who is Liable Here?

In this type of accident, it would come down to liability. There is not just one party at fault here, either. Despite the fact that the driver was operating an out-of-service vehicle, another question must be raised: What about the driver’s employer? Was the driver the owner of that truck? In these cases, there are several parties that may also be considered liable for the accident and any injuries – as well as the extensive property damage associated with the accident.

For example, the following parties may be liable:

When a truck accident occurs, there are several complex issues that arise. Not only is there the issue of liability (and the number of potential defendants), but identifying potential long-term damages is also challenging. If you have been injured in a semi-truck accident or an accident that involved negligence of a third party, you may be entitled to damages. To explore your options, you must first contact an attorney.

The law firm of Stenger, Diamond & Glass LLP are here to help. Our attorneys have the experience and resources to help bring a successful truck accident claim to the courts – and we will aggressively fight for your right to compensation. Get started by calling us at (866) 290-6929 or complete our contact form.