No Tree Falls on a Deserted Is... 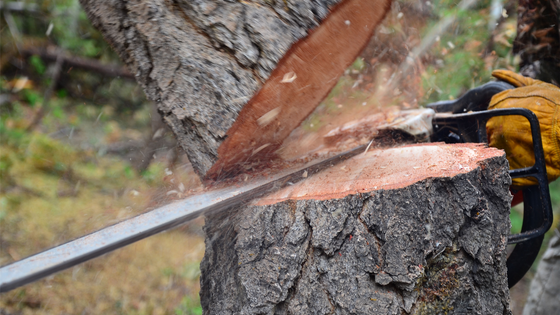 No Tree Falls on a Deserted Island

I remember my first philosophy class in college. It was unfortunately scheduled for 8:00 a.m. on Monday morning. The professor wore a corduroy jacket with elbow patches. He smoked a pipe. It was a small group. He started the conversation with a question: If a tree falls on a deserted island, does it make a noise? I thought about that question for 30 seconds and promptly fell asleep. Clearly, I hadn’t heard it.

The reality is that trees don’t fall on deserted islands. They fall on lands owned by people who may have legal claims arising from the same. I would have been more interested in the subject if the professor had asked, “What does it mean to a person who owns a tree to have it cut down by a stranger?” But, he didn’t.  However, the New York State Legislature has answered the question.

A utility company starts cutting down trees outside of an easement on your property made 100 years ago. A neighbor decides to take things into his own hands because he’s unhappy with the shade cast by a tree on your property onto his garden. A neighbor cuts down some of your trees to allow his land to expand or to prevent their roots from interfering with his sewer system. A neighbor cuts down your trees because he honestly believes they are his trees.  A developer clears the wrong lot.  All of these things have happened.

When they do, there is a remedy at law.

The New York State Legislature has provided it at Real Property Actions and Proceedings Section 861(1). That statute states that, if a tree is cut down on your property without your consent, that person cutting it will pay you the sum of $250.00 per tree and the reasonable cost of restoring the land affected by the cutting. Further, if a tree that is cut down is a tree that has been harvested for lumber, you will get the value of the tree as lumber multiplied by three.

That statutory definition of damages is different from the common law measure of damages most of us meet in automobile collision costs.  The general rule is that damages are measured as the cost of repair or the cost of replacement or loss of value, whichever is the LESSER.  That is why when your car is wrecked, your carrier only pays you the Blue Book value of the car instead of repairing it.  But that is not the case with trees.  Trees are treated differently.

Several years ago, I received a phone call from a surveyor. His client owned a 5-acre parcel. His house was located near the Town road at the front of the parcel. The 5-acre parcel ran from the road and shared a border with lots in an adjoining subdivision. The land fell away from his client’s house. The client couldn’t see the rear of his lot from his house. The client had never walked his property before. He had just done so. He discovered that a lot of trees had been cut down on his property by a person unknown. The trees were all small boled cedars.  There were a lot of them.

The client started a lawsuit with another law firm. He claimed that the neighboring landowner had trespassed on his property and cut down the trees. A physical inspection made it clear that the neighbor’s lawn had expanded into the area in which the trees had been cut.   The Complaint was proceeding under a common law theory of damages.  We were hired to take over the case. The first thing I did was amend the Complaint to bring a claim under RPAPL Section 861 for $250 a tree and the reasonable cost of restoring the property to its former status.

As it turned out, the tree cutting on my client’s land wasn’t all the tree cutting that had occurred at the location. My client’s neighbor also owned an oversize lot with his house located far from its boundary with the neighboring subdivision. He joined our lawsuit. Between the two lots, over 400 trees had been cut down.

There was a trial. The neighbor, who had expanded his lawn, denied cutting down the trees.  We found a witness to testify that she saw him cutting the trees and placing the trees in a woodchipper. The enterprising neighbor never testified.

The trees that had been cut were all small cedars. They were not more than 1 or 3 inches at their bole. The trees belonged to my clients, but they barely used that portion of their property for recreational purposes. Nor did the trees provide privacy as they were too far away from the residences to do so.

There was a strong argument to be made that the cutting of those trees did not diminish the market value of my clients’ property by one iota. After all, anybody who wished to purchase the residences of my clients would place little value on trees that they never knew existed.  Nonetheless, RPAPL Section 861 made clear that my clients were entitled to monetary damages. My clients received a verdict of $280,000.

Statutory interest is, if you will pardon the pun, a very interesting concept. The idea is simple.  If you have been damaged, you have been deprived the use of value upon which you should earn interest while waiting the adjudication of your claim.

There are two important questions about interest:  When does it accrue?  At what rate does it run?

In New York, statutory interest applies to every claim on the date that the events occur which gives rise to it.  A claim for personal injury is the only exception to this rule.  In the case of a personal injury claim, interest only accrues after a determination of liability has been made. This is why insurance companies never settle. (That is another story for another blog).  In the tree case, interest started running on my client’s claim from the date that the trees were cut. It was not easy setting that date.

We did have the eyewitness to the cutting.  Our arborist determined the age of the cutting. The jury found the cutting had occurred a little more than 40 months prior to the verdict.

The rate of statutory interest was, and remains, 9%. In 1981, which was back at the beginning of my career, interest rates had gone through the roof. House mortgages were at 18%. In that year, the New York State Legislature, in an effort to keep up with the interest market, set the statutory rate of interest at 9%. Interest rates in the marketplace have come down precipitously since that date. The statutory rate remains the same.

The consequence of the application of interest to the verdict rendered in favor of my clients was significant. It added nearly another $100,000 to it.  Suddenly, the claim was worth $380,000.

Not all tree cases are as dramatic as the one that I have just described. It is the only tree case that I have ever taken to trial. Mostly, tree cases arrive in a smaller scale and without the malice of a covetous neighbor.  The professionals in the industry know the standards of RPAPL Section 861. Once liability is apparent, although not judicially determined, the cases usually settle.  The 9% interest encourages that outcome.

If you wake up one day and find that someone has cut down your trees, don’t bother calling the person who did it. They will offer to pay for the appraisal that will show you that you have suffered no loss.  They are not going to tell you about your rights under RPAPL Section 861.

Call SDG.  We’ll tell you.  We know them.  We have delivered on them.  We stand ready to do so again.

Stenger, Diamond & Glass LLP (SDG Law) has 13 experienced attorneys skilled in the area of personal injury, family law, estate planning or general litigation, real estate and more. As one of the largest law firms in Dutchess County, we have the available resources to handle any category of legal dispute. Above all, we will take the time to listen to your problems individually. Contact us today.