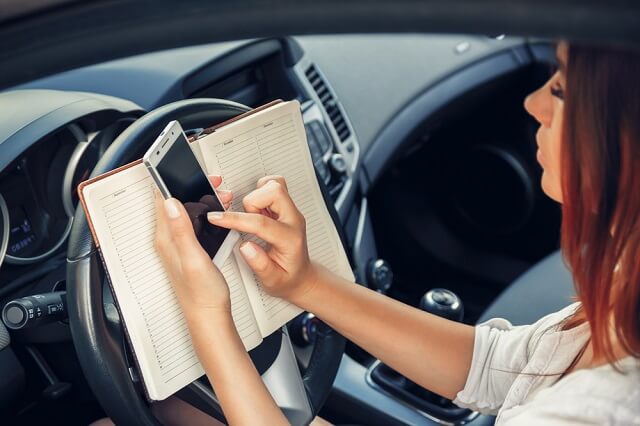 New York law prohibits the use of hand-held mobile telephones and other devices while operating a motor vehicle. Most of us, however, still occasionally sneak a peek while driving. This is a dangerous maneuver. If you are traveling at 65 miles per hour, a 3-second glance at your phone means that you’ve driven the length of a football field without watching the highway ahead. Serious accidents occur that quickly. But surprisingly, the enforcement of New York’s distracted driving laws can often be difficult.

Device Could Determine if Use of Phone Was Factor in Accident

If Ben Lieberman, who lost his son, Evan, in a 2011 crash, is successful, all that could change. Lieberman – whose post-accident research revealed that texting was a likely factor in his son’s death – has begun an effort to construct a device that could plug into a cell phone and tell the police if the phone was in use at the time of the crash. A bill allowing police use of such an investigative device has been introduced in the New York legislature.

The device, currently called the “Textalyzer,” would allow the police to access any cell phone at a crash scene and determine if it had been in use in the time frame just before the accident. It would not, however, be able to access the cell phone owner’s personal information. Nor could it download photos or other private material. Still, the Textalyzer would be able to quickly divulge if the phone was in use, and whether or not text messaging had taken place at the time of the auto crash.

Device and Proposed Law Are Not Without Critics

Some civil liberty experts are already voicing concerns. They point out that current law does not prohibit the use of a cell phone for some purposes – for example, to take a quick look at a digital map. They also say that it would be impossible to exclude certain possibilities, such as that the driver had legally texted by pulling to the side of the road before the actual crash. They add that since New York law allows hands-free operation of a cell phone, it isn’t at all clear how the Textalyzer could determine if the driver’s phone use was in actual violation of the law.

Careful Balancing of Interests is Required

New York’s lawmakers face a difficult but important balancing act. According to federal government data, across the nation in 2014, more than 3,150 people were killed and 431,000 were injured in motor vehicle crashes involving distracted drivers. Inappropriate cell phone use is even more rampant among teen drivers – the group of motor vehicle operators that were involved in a disproportionately high number of crashes, even before the advent of smartphones.

Involved in a Car Crash?

Have you or a family member been involved in a motor vehicle accident? The law firm of Stenger, Diamond & Glass LLP has the experience and resources to help you recover the damages that you may deserve. One of the most highly respected law firms in Hudson Valley, we have offices in Poughkeepsie and Wappingers Falls. If you have a legal need, we have a solution. As one of the largest firms in Dutchess County, we have the power to bring substantial resources to your case, no matter how complex the issues. Call us at (866) 290-6929 or complete our online form.